New Year's Eve has always been a time for looking back to the past, and more importantly, forward to the coming year.

Most people fail in adhering to their stated New Year's resolutions. Studies have shown specifically, 22% fail after one week, 40% after one month, 50% after three months, 60% after six months, and 81% after twenty-four months 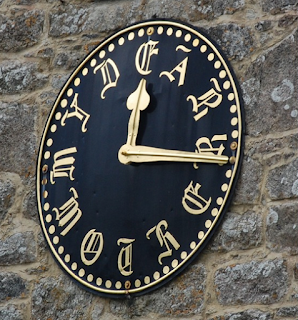 1.  Drink more water. I'm useless at staying hydrated, and the benefits of drinking plenty of fluids are well known. Drinking when out on Dartmoor even when its cold and raining is something I simply don't do

2.  One of my New Year's resolutions is to not sit at the computer as much. I'll try to stand and type as well.

3.  Eat more local. I am ashamed to say I have eaten at just two Dartmoor Eateries, and supped at just one Dartmoor Inn in the last 12 months. Shame! Though as a vegetarian, I'd welcome any recommended spots to eat!

4.  Get out on the Moor more often. I have spent less time on Dartmoor in the past year than at any point in the last 5 years. Time for that trend to stop.

5.  A gathering at Fur Tor (North) this New Years Day appears cancelled – almost certainly a victim of the torrential rainfall coming at the end of one of the wettest years on record. The more distant and lofty peaks, outcrops and points must feature higher up my walk schedule, after my most recent jaunts have tended to be within spitting disance of the car.

6.  Decide on my actual letterboxing name: WITC or whoisthechallenger? Or Who is the challenger.

7.  Keep siting some nice boxes. I would like to site 4 more sets this year.

8.  Do the Ancient Dartmoor Perambulation walk (http://www.ldwa.org.uk/ldp/members/show_path.php?path_name=Dartmoor's+Ancient+Boundary+Perambulation). I need a challenge this year. Its a pity that the Kirkpatrick website is down, cause I'd love to add my name to their list of Perambulation completers.

9.  Finally, and as the blog 'counter' reveals the number of hits on my blog has overtaken the number of boxes I've ever found, I vow to continue blogging my Dartmoor Letterboxing adventures.

Thats all! I'm off to countdown to midnight now. Wishing everyone a happy and peaceful new 2013. May your letterboxes be easy to find and your routes be kind underfoot.
at December 31, 2012 No comments: 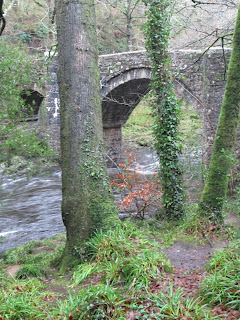 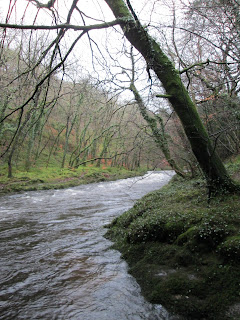 I'll start by saying that I hope that all my blog readers had an enjoyable and peaceful Christmas.

Boxing Day is a day we usually set aside for a day letterboxing on the moors.  Unfortunately, this year, our Boxing Day plans were someone dampened by the weather.  With yet more rainfall and strong winds piling in from the Atlantic, we had to make do with a stroll down the River Dart between New Bridge and Holne, watching the canoeists and marvel at the force of a mighty river in spate.

Heres hoping that the new year will bring us drier weather, and happy days on the high moor.  Happy holidays everyone! 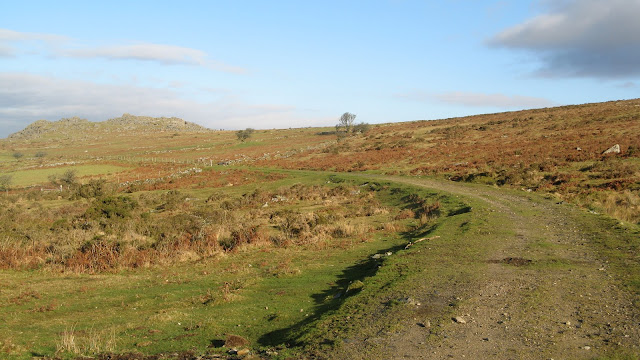 Whoisthechallenger's Christmas walk has now been sited in the Leedon Tor/Ingra Tor area.  It will be on site until the end of January 2013.  Mayan apocolypse dependant...

The Christmas walk has now been removed from the Moor.  New series to follow in 2013.

Missing boxes will not be replaced.  Please hide the boxes well, and ensure the pot lids are secure - some of the stamps are single potted.
at December 19, 2012 No comments: 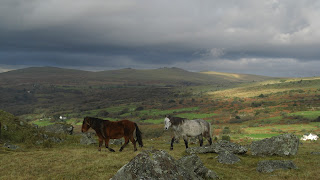 It has been some time since we've walked around Ingra Tor. This diminutive peak looks up to far loftier places such as Harford Moor Gate and Two Bridges. Yet at just 339 metres, this lowly spot is perfect for short Winter days, when the weather could turn bad suddenly.  Yet perched far above the Walkham valley, Ingra Tor's position feels airy and dramatic. 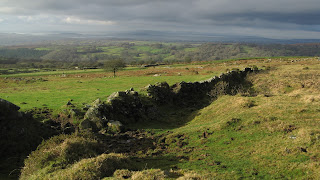 And so with less than perfect weather forecast, WITC set their sights on Ingra Tor and Leedon Tor last weekend. Though foggy at the Devon coast, the sun was shining at Goadstone Pond, with little sign of cloud or rain (or snow!). In fact, it wasn't so cold either, and the hat and gloves remained in the bag. 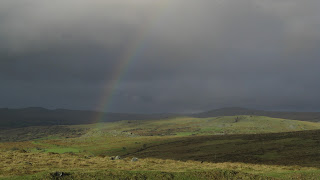 Below us the crowds, on bikes or walking dogs streamed up and down the old track bed of the Plymouth and Dartmoor Railway. This railway provided regular transport links between Princetown and Yelverton between 1883 and 1952 for passengers and freight. Seven trains per day made the return journey in 1952, though none on Sundays.

As we followed the line of the railway gently uphill, the clouds rolled in. With regular diversions for letterboxes, our route took us on a loop of Ingra Tor and up the Yes Tor Brook towards North Hessary. It was about this point on our walk that the rain started to fall.

But we were satisfied with the day's progress and turning for home, we were blessed with some late sunshine.  8 miles travelled and 14 boxes found.