Challenge 9: USE LETTERBOXING TO RAISE SOME MONEY FOR A LOCAL CHARITY 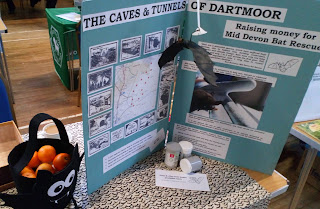 I think this counts as an ongoing achieve.  I want to thank everyone who has already purchased a copy of my Caves & Tunnels of Dartmoor charity walk.  My mother and I attended the Autumn Meet on Sunday and we were overwhelmed by the generosity and kindness shown by Letterboxers. In addition to the walk, I had some surplus and new Letterbox pots and clip-lock boxes which I offered - for a small charitable donation - at the Meet.  Obviously, I will continue to maintain the walk to the highest possible standards and I will post any news updates on this blog, as best I can.


I will also report back (probably in March) on how much the charity walk raises too.  I seem to recall this information being fairly normal, broadcast in the last Letterbox update before the Meets.  This is no longer the case - reasons unknown.  Thanks again to everyone for your support with this walk!
at October 31, 2017 No comments:

I figured that a bit of information about the selected Caves and Tunnels used as part of my Charity Walk wouldn't go amiss.  The lucky 13 chosen are just some of the far higher number on the Moor.  A few of those I picked are perhaps a little obscure, so here's the run-down.

No.1 - Potato Cave
Where?  For the image, I used the Potato cave close to Combeshead Farm, near Down Tor.
What?  Many old Dartmoor Farms had potato caves - man made caves, dug into areas of soft, decaying granite, and used for the storage of potatoes or more... ahem... illicit produce.

No.2 - Grenofen Tunnel
Where? Grenofen, between Horrabridge and Tavistock.
What?  Designed and built by esteemed engineer, 'Greatest Briton' candidate and South West England fan, Isambard Kingdom Brunel in 1859.  Grenofen Tunnel is about 0.2 miles long, and formed part of Brunel's Devon and Tavistock Railway.  Renovated using EU cash in 2011, it is now is an important landmark on the Drake's Trail, a national cycle route.  The ceiling of the tunnel has metal baffles fitted for bats to roost between and reduce draughts!  Some areas are also left unlit, and lighting is motion activated to help minimise bat disturbance by cyclists.

No.3 - Pixies Cave
Where? Sheeps Tor
What? A human sized subterranean hole amongst giant boulders on Sheeps Tor's southern flank.  It can be tricky to find, and even trickier to get in, but contained within are candles, a visitors book, and a host of legends about Dartmoor piskies.

No.4 - Baker's Pit
Where? Beneath Holy Trinity Church, Buckfastleigh
What?  Bakers Pit cave system is the largest in Devon, with over 3.5km of caves and chambers to explore.  Discovered in 1847, then used extensively during both World wars, these stunning caves can only be entered by recognised caving groups and they're now accessed via gated, vertical shafts, set in the church grounds, since a landfill site filled in their original quarry entrance.

No.5 - Gobbett Mine Tunnel
Where? Hexworthy
What?  Gobbett Tunnel had two lives.  Firstly as an adit for the Gobbett Mine.  Then allowing for a pipe line to run from the Swincombe River to the Venford Reservoir.  On modern maps, the tunnel is referenced as a pipeline.  It is shut to the public, and locked closed.

No.6 - Phillpott's Cave
Where? On the bank of the Blacklane Brook aka Wollake
What? Natural shelter beneath enormous slab, with disputed human purpose.  More recent artificial additions including turf walls and candles.  Some additions were attributed to author Eden Phillpotts, hence the name.

No.7 - Higher Kiln Quarry Caves
Where? Buckfastleigh
What?  An astonishing jewel in Dartmoor's cave crown.  This limestone cave system is considered to be one of the oldest in the country, carved by water - the early River Dart - some 150,000 years ago.  Fossil remains of 16 different mammals from the last ice age (including lion, elephant and bear) have been discovered here, representing the greatest such find anywhere in the country.  During the Wintertime, the UK's - and possibly Europe's - biggest colony of Greater Horseshoe bats hibernate here.  There are permanent bat populations in the area, and the quarry is owned and managed by Devon Wildlife Trust.  It is closed to the public though, with highly restricted access.

No.8 - Shaugh Tunnel
Where? Between Shaugh Prior and Clearbrook
What? A single track railway tunnel on the old South Devon and Tavistock railway, a line which closed in 1962.  This curved tunnel was also the handiwork of Isambard Kingdom Brunel.  Now electrically lit and part of the Plym Valley Trail.  Tunnel also reputed to be haunted!

No.9 - Merlin's Grotto
Where? On the banks of the Cowsic river, just upriver from Two Bridges
What? A small rocky recess named in the 19th century by local landowner Reverend Edward Bray.  Reverend Bray had a deep passion for folklore, poetry and druids.  He named islands in the Cowsic, and inscribed poems on rocks in and around the river.  He imagined (hoped) that Merlin the magician would live in the grotto that he discovered and named for him.

No.10 - Nun's Cross leat tunnel
Where? Nuns Cross Farm near Whiteworks
What? Tunnel on the Devonport Leat, an epic watercourse built in the 1790's to provide water to Plymouth's dockyard.  The route from the West Dart below Crow Tor takes in an aqueduct, a waterfall, and this tunnel passing the water from the valleys of the Swincombe to the Meavy.  The well maintained leat now fills Burrator Reservoir, keeping the tunnel in operation.

No.11 - Grant's Pot
Where? Near the confluence of Wollake and River Erme
What?  A water & mud filled cave below ground level.  'Discovered' in the 1950s by hiker, pot holer, Letterboxer and scout group leader John Grant (hence the name).  He believed it was a mine adit, but this is disputed.  He decided to put a Letterbox in the hole, which may or may not survive today - depending on who you ask.  The full fascinating story of Grant's Pot can be found on Tim Sandles' excellent Legendary Dartmoor website.

No.12 - Yelverton Tunnel
Where? Yelverton, and directly beneath the roundabout in the village centre
What? A tunnel on the old South Devon and Tavistock line which has not been provided with the same treatment as Grenofen or Shaugh, as it is now surrounded by properties built over the old line.  Indeed you almost need to trespass to view this old, overgrown, neglected tunnel.

No.13 - Vixana's Lair
Where? Vixen Tor
What? A very large cave in the base of the main stack, on the side you can't see from the access land.  According to legend, Vixana the witch lives in the cave.  Unproven.
at October 28, 2017 No comments:

The Caves & Tunnels of Dartmoor

'The Caves & Tunnels of Dartmoor' is the title of my latest Letterboxing project: a Charity Walk sited this month, and out on the Moor until the end of March 2018.


I have never sited a charity Letterbox walk, so the whole experience so far has been fascinating.  Let me explain.  I had a desire to do some good.  To raise some cash for a charity which does work on Dartmoor.  I had an idea for a set of interesting boxes.  I have a passion for the environment and conservation.  It seemed obvious to choose a wildlife charity, and Mid Devon Bat Rescue - based near North Tawton - stood out.  This charity is run by volunteers, helping lost, injured or orphaned bats.  It's large enough to care for a significant proportion of Dartmoor (a line from about Tavistock to Newton Abbot northwards in fact) yet small enough that funds raised by a charity walk will make a real, tangible difference.

My caves and tunnels themed stamps were suitably appropriate.  Kari, who runs the charity was on board with the idea, and so it has happened!

The boxes are sited in the Lyd Valley.  Chosen for various reasons not least because it is a stunning place to go Letterboxing in the off-season.  There are 14 boxes in the walk plus a complementary with the cluesheet.

If you would like a copy of the clues, they cost £2.50 of which all proceeds go to Mid Devon Bat Rescue.  The boxes are on the Moor now!  There's no nesting birds, no bracken, and no snow.  What are you waiting for?!

For a copy of the clues, please post a cheque for £2.50 made payable to 'Kari Bettoney'  plus a stamped-addressed-envelope to whoisthechallenger.  Email me (see below) for my address.

Any problems or queries, please email me: whoisthechallenger@rocketmail.com
at October 09, 2017 No comments: