The closure of the Okehampton Ring Road some 10 months ago has had one significant effect on Dartmoor. 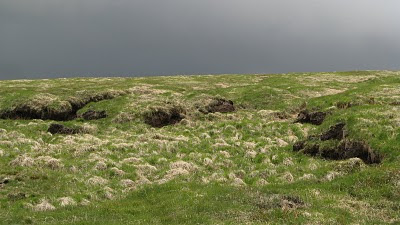 The most remotest spot has moved. Previously, the furthest you could get from road, car park or inhabited house was between Cut Hill and Fur Tor on the North Moor - some 3-and-a-half miles from civilisation.

Now the Southern End of Black Ridge Peat Pass near Little Kneeset takes the wilderness honour. It can claim to be the milestone of 4 miles from human influence. This, on our tiny, crowded isles is some achievement. Its not a pretty or memorable spot to visit, but you'd have to travel North well over the Scottish border to be more distant from modern life.
at July 29, 2010 2 comments:

Cut to the chase 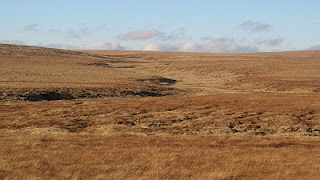 On the website dartmoorletterboxing.org/, in response to my post regarding Cut Hill, Steve Trevaskus kindly responded to say that the hill is positively alive with boxes. He refers of course to a decade old series of 'Legends on Dartmoor' boxes with clues referring to range poles twice removed. 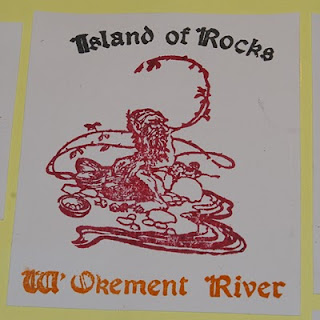 You would have forgiven me for having destroyed
those clues, and not bothered ever searching, wouldn't you?
However, there seems to have been a recent see-change towards a re-release of believed long lost WOM boxes.
WITC are in possession of 3 different letterboxer's clues which require finding on behalf of the owner. Some dating back to 1994. Its been fun searching for them actually. There is no GPS to make things easy. There is the added challenge of the decrease in magnetic North over time. WITC has always loved being the first visitor to a box in a few years, and had some success with the old cluesheets we've received, so maybe we should check out Cut Hill again...
at July 14, 2010 No comments: 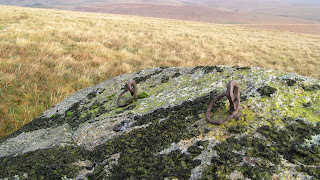 Out there in the big wide world, there is a letterboxer - lets call him John (cos thats his name) - who sells the virtues of visitors books on his cluesheets.
I quote: "All boxes have books, after all wasn't that the whole point about letterboxing?"
Here, here John. James Perrot took Plymouth's citizens to Cranmere Pool not simply for the ride, but to write their names in the book.
I have written on the forum at http://www.dartmoorletterboxing.org/ in the
past about my personal fondness for visitors books, and a route around Amicombe Hill just
reinforced my belief. Besides the ring rock, and the GPO stones, the flagpole and stakes (and 34 boxes found), this hill doesn't have much going for it. Its obscure, remote, and overwhelmed with letterbox sites. Which means it has all the makings for a Cut Hill Mark II.
The ring rock is intriguing but the visitors books are even more so. 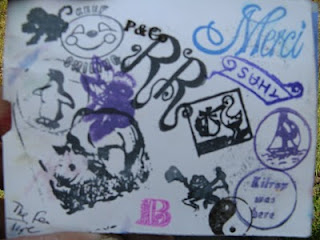 Its the back-of-book policy which puzzles me most. Who is the prancing frog, and why is the space reserved for them?
The Officially Official Dartmoor Officials - how? Why?!Ying/Yang, the monkey, Keep Smiling... Huh?
The reason was explained as being "so we know who has visited before without having to go through the book" but I don't know who these people are, so how does that help?
I'll stick to front for now.
at July 08, 2010 1 comment:

We all like convenience. Maximum effect for minimum effort. Instant results.
In letterboxing terms, it explains why the 'roadies' are so popular. The edge-moor boxes just a few metres from the car park give us a sense of achievement without the sweat of hiking to get them. However, not all boxes can be just a few feet from the road. The box thief would strike, and, well, thats not letterboxing - thats a treasure hunt. Anyway, we enjoy the solitude of the remote parts of the moor.
The bit we are forced to endure is the long walk in (and out again). 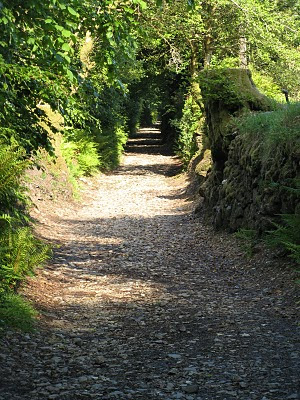 You know the bits. The trudge up the (usually gravel) track from car park/bus stop to the moor gate and beyond and to the first box out of reach of the day trippers. Gutter Tor to Eylesbarrow comes to mind and Baggator to Lynch Tor bring tears to my eyes.
The road/track to Lud Gate from Cross Furzes however, is always full of surprises. Not only did we find 2 letterboxes hidden in its banks recently, we are able to take time to reflect on the history in the buildings and artifacts along the way.
Hayford Hall is at the end of the sealed road. This country estate, it has been suggested, was Sir Arthur Conan-Doyle's inspiration for 'Baskerville Hall' from his novel: Hound of the Baskervilles. What is known is that Hayford Hall was once rented by wealthy US art collector Peggy Guggenheim (neice of Guggenheim Art Collection founder, Solomon). During her 10 year tenure in the 1920s, well known British and American artists, writers and poets lived in the hall with her. You too can stay at Hayford, albeit in one of two 2 bedroomed rented cottages in the grounds.
In the wall of the lane just East of self sustaining retreat Furze Acres, there appears to be a tiny 'shrine' recessed into the bank. It has been said that money and objects have been left here, but without any explanation to its purpose.
Perhaps its just how they pay the milkman around here...
at July 04, 2010 No comments: